During the New Year holidays, the environmental school “Life of the Winter Forest” was organized in the ecological center “Baklanovo” of the Smolensk Poozerye National Park. In addition to the national park, in the conduct of classes, traditionally for such events, the non-profit partnership “Birds and People” participated. Despite the cold weather, children from Moscow, Smolensk and Smolensk Oblast, Tver Oblast and Borisoglebsk of the Voronezh Oblast gathered for an out-of-school event. The children took part in the excursions to the forest with pleasure, watched the birds, sorted out the intricacies of animal tracks, tried to identify invertebrates hibernating under the bark and in the anthill, and also engaged in many other exciting things. The transect established by the participants of the environmental camp 10 years ago was restored, as well as a trial area for monitoring long-term changes in the structure of pine forests. 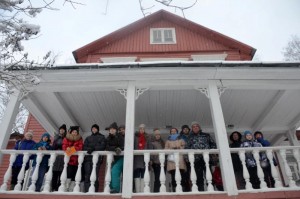 The participants of the eco-school in the House-Museum of NM. Przewalski.

In addition, the participants of the eco-school visited NM House Museum. Przhevalsky, walked along the eco-trail “In the Kingdom of the Brown Bear”, enjoyed the view of Lake Sapsho from a viewing platform, watched Przhevalsky’s horses and learned a lot of new things in the birch bark museum. In the evenings, the teachers gave lectures to the children on various aspects of the nature of their native land. Young researchers not only worked, but also rested with gusto, they participated in games, competed in creative contests and simply communicated with each other.

One day was almost entirely devoted to sports ornithology competitions – berding. Despite the frost, the guys were able to photograph in total 18 species of birds, which is not bad for the winter! At the same time the participants of the competition got acquainted with the avian population of our places, and now they will surely be able to distinguish, for example, a bird from a nuthatch! Winners, of course, waited for prizes and medals. 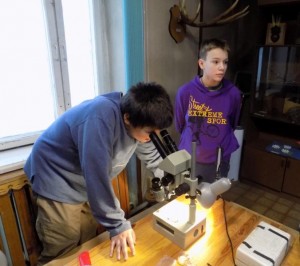 As a result of all the classes, a conference was held at which the children presented their research work, carried out under the guidance of experienced mentors, in which they summarized the results of their research. All projects had a high level and testified that the children learned not only to express their thoughts correctly, but also, working in a team, to give interesting presentations to the public. The results of the children’s research works will be transferred to the scientific department of the national park for further use in the scientific monitoring of natural objects. 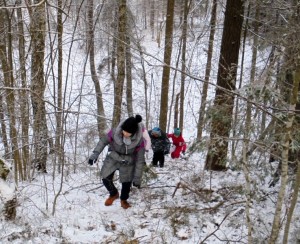 The conference was attended by the director of the national park A.S. Kochergin, deputy. Director of Environmental Education and Tourism V.A. Astakhov and deputy. Director of EcoCentre “Reserves” (Moscow) EB Knizhnikova. They congratulated schoolchildren and teachers on the New Year, praised the children for their genuine interest in wildlife and wished them new success in youth activities.

All participants will long remember the days spent in the Poozerje Eco-School, because here they expanded their knowledge of nature, made new friends, had a great time!