Funding support: Income from guided canoe trips in adjacent mangroves, nominal center entrance fee and occasional rental to outside groups, as well as project funds from international donors that have included USAID, CIDA and Netherlands National Committee of the IUCN.


Overall aims of the centre

Description of the centre

The Puerto Hondo Environmental Interpretation Centre is located adjacent to a relatively intact remnant of Gulf of Guayaquil Mangroves in the Reserva de Produccion Faunistica de Manglares el Salado (RPFMS) of 5,309 hectares, a part of the national protected area system of Ecuador.

Besides the environmental interpretation centre, there is no other protected area infrastructure and no on-site administration.

The majority of the RPFMS is made up of mangrove forests, with small patches of dry tropical forest and savannahs. A total 79 bird, 12 mammal, 7 amphibian, 20 fish, 18 mollusk and 13 crustacean species have been registered in the RPFMS.

Important species include colonies of Fishing Bat (Noctilio leporinus), Crab Eating Raccoon (Procyon cancrivorus), and Osprey (Pandion haliaetus) and is one of the most important areas for Near Arctic migratory species.

A small population of four individual Saltwater Crocodiles (Crocodylus acutus) have been found within the reserve.

The Cerro Blanco Protected Forest includes dry tropical forest and matorrales in its lower areas and semi-humid forests at the highest point, Cerro Azul at 506 meters. It was declared Ecuador’s second Important Bird Area in 1998.

Both sites are located within one kilometer of each other on the outskirts of the city of Guayaquil 2’ 10’S, 80’ 02’ W.

The RPFMS carries out periodic activities for the general public, to celebrate the International Migratory Bird Day, Earth Day, etc. The Centre is open to the public and includes a small audiovisual library in addition to permanent and temporary exhibits. The Centre serves as a base for the children’s ecological club. 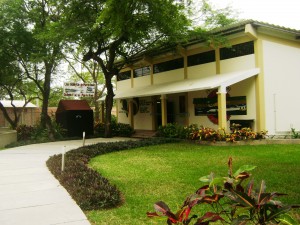 It has been difficult to interest visitors to the recreational complex to visit the interpretation center and the ecological club still has not fully developed the centre’s potential for outreach and environmental education programs with the local community and schools.

Join WLI free and create your own member profile showcasing the work you are doing.